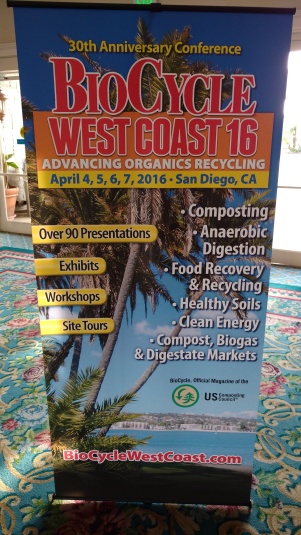 Suddenly, and happily, we are seeing great momentum on the topic of excess food at all levels of the hierarchy — from source reduction to recovery and diversion for people, animals, energy, and compost.  The BioCycle magazine team is of course at the heart of this transition, and I was pleased to be a part of last month’s West Coast 2016 conference in San Diego which focused on advancing food recovery and organics recycling.

There was an underlying air of excitement among conference participants regarding California’s efforts on organics recycling, specific to Assembly Bill 1826 of 2014, which requires that 1) businesses recycle their organic waste after April 1, 2016 (phased in by volume generated) and that 2) local jurisdictions concurrently implement recycling programs to divert organic wastes generated by businesses and multi-family residential dwellings.  That excitement related to the recent allocation of $100 million in greenhouse gas reduction funds in the Governor’s budget to CalRecycle, of which $61 million will be allocated to the Organics Grant program to spur investment in needed infrastructure to reduce the amount of food and green materials being sent to landfills.  The funding is timely, as CalRecycle Director Scott Smithline noted that California is currently discarding roughly 6 million tons of food waste per year in the state’s landfills, and that food is the largest generator of methane gas from those landfills. To accommodate California’s future goals for getting millions of tons of organics out of landfills, he pointed out that concerted efforts will be required on 1) source reduction and waste prevention (which involves significant culture change), 2) infrastructure development (essentially doubling current levels), and 3) market optimization issues (which will require a proper valuation for compost).  Despite the many “strings” attached to grant opportunities, Smithline noted that California is “all in” on organics recycling.

As always, this BioCycle conference explored a broad array of topics over four tracks — including drought, soils, and stormwater management, organics recycling policies, frameworks and measurement tools, anaerobic digestion, biogas issues, and organics contaminant reduction, and a comprehensive track on food recovery and recycling/innovation issues.  An inspirational talk by Robert Egger (founder of DC Kitchen and LA Kitchen) set the stage for the importance of seeking to achieve positive social and environmental impact through many of these initiatives.  LA Kitchen’s mantra is “revealing the power of food” — and those of us involved in the food recovery/innovation track could not agree more.

Pre-conference activity included an impactful workshop devoted to the theme of wasted food prevention and food rescue with many thought leaders.  Kicking off that session was Dr. Eric Handler, Orange County Public Health Officer and co-founder of the Waste Not OC Coalition (WNOC).  The Coalition’s mission is to “meet the nutritional needs of our community and protect the environment by facilitating the donation and distribution of wholesome surplus food.”  A powerful goal, simply stated.  The formation of the group is impactful as well.  In 2012, Dr. Handler asked Mark Lowry, Director of the Orange County Food Bank, the following question:  If we were able to capture food that is wasted and direct it to people in need, could we end hunger in Orange County?  When Lowry responded “yes” the two delved deeper into solutions for food insecurity, resulting in the creation of WNOC.

The Waste Not OC Coalition focuses on educating the community about the great potential in donating food, identifying food insecure individuals, and connecting those individuals to local sources of food.  Partnerships with food producers (including restaurants, schools, hospitals, hotels, stadiums, and convenience stores) and transportation groups such as Food Finders, are critical to its success.  Notably, the Yellow Cab Company of Orange County also partners with WNOC, picking up donations during non-peak hours and delivering to community food shelters and pantries.  Now that’s thinking outside the box (or cab, in this case)!

Also notable here is the role of the Orange County Health Commission (and its Food Protection Program manager).  As Handler noted, health inspectors normally aren’t associated with promoting food donations from the entities they cover, and food service establishments often don’t donate excess food due to safety and liability fears.  Orange County food service establishments incorrectly believed that the Health department actually discouraged donations for those very reasons.  Unearthing that misconception was key — and shows the power of opposite thinking.  Health inspectors were encouraged to engage food service establishments on the potential for donation of safe food (at the front line, so to speak), and they now educate businesses on how to donate food safely without risk concerns.  In addition, the Food Production Program manager released an educational video highlighting local hunger and promoting the donation of food to ease the problem.

As part of its educational efforts, the Coalition has also helped implement a screening tool to help local medical facilities identify those suffering from hunger and direct them to local pantries via Google Maps.  As noted on its website, the Waste Note OC Coalition strives to “feed the need” — and has provided 280 tons of food (466 thousand meals) to those in need since inception.  As Handler notes, the organization’s model can be replicated easily — and WNOC has provided a toolkit to do just that.

On the measurement front, Andrew Shakman of LeanPath noted that if we want to show progress on reducing food waste, we have to measure.  Shakman added that we have become “uncomfortably comfortable” with the amount of wasted food in our kitchens, and that while it is easy to move down the hierarchy to the “tangible” side, upfront prevention will yield the highest ROI.  He pointed out that food waste is largely a behavioral problem, and that by engaging front line employees and providing easy real-time measurement tools, reduction can be maximized.

Jordan Figuerido discussed messaging and imagery strategies around wasted food with a spirited presentation of his work on the @UglyFruitandVeg Campaign.  Noting that the visible costs of food waste are only a fraction of the invisible costs, he detailed his work to make food activism powerful and fun — and it is working!

I participated in a “lightning round” session on infrastructure innovations, presenting the work of colleagues in Philadelphia on a Food System Sensitivity Model designed to enhance sustainable food management by balancing social, environmental, and economic benefits of repurposing excess food (and previously featured here in BioCycle).  The concept involves partnerships between retailers (who have excess food) and social enterprises (in need of nutritious food) to create value-added products which can be sold at a profit — thus making the process durable for both parties.  Such approaches provide multiple wins and have great potential across the country.

In a later track on Wasted Food Prevention and Recovery Innovations, I presented my work on the need to move from conundrum to clarity on food waste, drawing on material from work with Jonathan Bloom published in Food Waste Across the Supply Chain: A U.S. Perspective on a Global Problem.  More to follow on that.