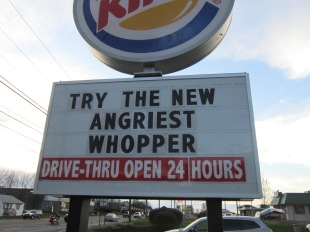 Thanksgiving.  A time where we give thanks for the food on the table and the bounty of the harvest.  A specific day on which we celebrate the value of food.  But what about the other 364 days of the year?  Our developed world culture makes properly valuing our food increasingly difficult, an afterthought, really, and when we don’t value something, we tend to waste it.  In the case of our food, think 40%, at least.  We’ve gone beyond celebrating food abundance, we simply expect it.

We’re surrounded by food in pristine displays that scream not only abundance, but perfection in abundance.  Why choose the imperfectly-shaped vegetable?  Why use up the slightly overripe fruit?  We can easily replace both with the perfect item, right?

That notion of abundance is at the heart of our culture’s wasteful ways, and the efficiency with which we haul away our food “waste” reinforces that profligacy – and has simultaneously kept us from aggressively pursuing alternatives for it.

And while our behavior regarding food is already wasteful, our words continually reinforce that behavior.  Big.  Buffet.  All you can eat.  Unlimited refills.  Dollar menu.  Two for one.  Five dollar combos.  The list goes on, but the underlying theme from such word associations is that we can get a lot of “quantity” for little cost and discard any excess.  Disturbingly, we increasingly equate value with quantity, and our words and catchy phrases perpetuate that mindset amid the notion of inexhaustible supply.

Words matter.  They are indicative of feelings, and ultimately our behavior and action.  And that’s why they are so important when it comes to our food resources – because those resources aren’t inexhaustible, and they are artificially inexpensive.

We have created a buffet mindset regarding our food; we love the “all you can eat” deal.  But stocking those trays right up until the last minute of the meal period leads to a lot of waste, which over time is normalized.  And while we love the “value meal,” we oddly seem to place much more value on quantity versus taste and nutrition.  I recently saw a fast food restaurant with an outdoor sign that simply said “5 for $4.”  It didn’t even specify the actual food item involved, just that you could get a deal on five of something.  That’s the wrong message to send to consumers.

Our food is also available in countless varieties, right up until closing time in our retail stores.  For baked items and prepared foods, that overstocking leads to excessive waste.  The low cost of disposal is already factored in, thus reinforcing consumer expectations.  And that constant availability extends to multiple venues.  Need some gas?  Get some food, too.  Need something from those ubiquitous drugstore chains?  You can get food there, too.  We’re inundated with food options at a seemingly never-ending supply of quick-marts and convenience stores, and that signage indicating 24×7 availability and speedy pick-up also reinforces the notion of abundance – overtly and subliminally.

In an airport between flights?  Loads of options there, and in some venues you can just sit down and pick from numerous food items that are coming to you via conveyor.  We’ve now brought automation directly to the table.  In fact, the conveyor belt is the table.  Trendy, but also concerning.  Automation.  That’s not a word that suggests valuing food, but another one that reinforces the theme of food abundance.

We’re also disconnected from our food like never before, both spatially and mentally.  With fewer farms and increased urbanization, we’ve lost touch with what our food looks like in nature, how it grows, what varieties exist, and what many of them even taste like in natural form.  And with the growth of processed foods comes a host of “ingredients” that we don’t know or understand, either.  Cheetos Chicken Fries?  What’s really in there, anyway?  And where does it come from?

That lack of knowledge doesn’t help matters, it simply helps to further devalue food in our minds.  I once had a farmer tell me that I could take all of the apples from a select group of trees in his orchard for a local food bank.  Why?  Because while delicious, his customers were never exposed to that variety in retail stores and simply would not buy them.

And now we’re bringing the concept of anger into the food picture?  Again, poor word choice.  Who needs an angry burger, anyway?  I know there’s a Hollywood link there somewhere, but that’s just another theme that we certainly don’t need to equate with our food.  If we’re angry about something, it’s clear we’re not inclined to try and preserve it, but to get rid of it.  We’re already too far down that path with our food.

The societal emphasis on big quantities, perfection, excessive varieties, and 24×7 availability cheapens food in our minds – again, both overtly and subliminally.  We’ve had an amazing reversal in our collective mindset regarding our food supply in just 70 years since the end of the War.  I was reminded of this recently by a participant in the recent Feeding the 5000 Portland (Maine) event who was describing his favorite food memory.   He detailed his youth in western Massachusetts where his family had a Victory garden.  Every day he was required to spend an hour tending to that garden or to the fruit trees.  Vegetables were stored, fruits were canned, and jams were preserved.  Fresh food from the family’s labor dominated their diet, so there was a distinct, tangible connection to their food supply – and that connection made them value it fully.  Processed food for his family was exceedingly rare, so much so that when he got to college he considered it a treat.

Such an environment breeds responsibility and little food was wasted — canning and a focus on using all parts of each product saw to that.  Individuals felt obligated to use food resources widely, reinforced by War-era posters proclaiming that “food is a weapon” and “food is fighting strength” and “help us preserve more.”  Several posters encouraged individuals to start Victory gardens and grow more food to help make the nation strong for the War effort.

With a rapidly expanding global, and increasingly urban, population, we can’t afford to continue our wasteful ways that have emerged from our culture of abundance.  We need to transition back to a collective mindset that values food (and all of the resources that go into producing it) responsibly.  And to facilitate that cultural shift, we need to remember that words matter.

When we think of food, the first words that come to mind shouldn’t be of quantity and perfection and endless supply, but of responsibility, optimization, value, and thanks (especially this week).  And anger certainly doesn’t have a place in that mix.

Note: This post draws on material for a much more visual piece published in the Huffington Post.  To see that piece, which is part of the Huffington Post’s “Reclaim” effort to increase awareness about the problems of global food waste, see this link.