While in Singapore last month for Carrier 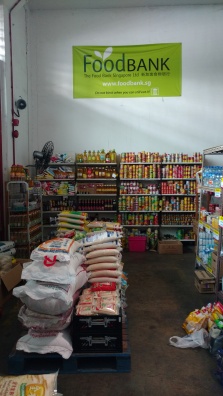 /UTC’s third annual World Cold Chain Summit (a powerful venue focused on reducing global food loss and waste through an improved cold chain), I was fortunate to be able to tour Food Bank Singapore with energetic co-founder Nichol Ng — who motivates everyone with the mantra “Let the Feeding Begin.”  It was a perfect, tangible, hands-on finish to a week of discussion on optimizing the use of our food resources.

Nichol, who also runs an established food distribution business, began our tour with some helpful background information.  She noted that Singapore is a great place to be in the food business for several reasons — it is an island nation that imports about 90% of its food (a look out of one’s hotel window always reveals hundreds of ships anchored and waiting to offload their supplies), it is a first world nation with access to advanced technology, and there are no import taxes on food.

Conversely, several factors lead to considerable food wastage in Singapore as well.  Singaporeans place a high premium on food quality, with the result that organizations will often return items considered “old” to their suppliers even though those items may have two to three months of shelf life remaining.  Receiving personnel critically inspect deliveries for dented cans or torn labels and are quick to return them for replacement (although the food within has not been compromised).  For other items, receipt of replenishment stock with just a few added days of shelf life can lead to returns of previously ordered, stored material.  As in the U.S., one gets the impression that disposal of food is simply too easy and engrained in business operations.

But there’s more.  As in many other highly populous, thriving Asian cities, large well-stocked buffets are highly prevalent.  And as with buffets all over the world, several factors lead to substantial waste of food — full stocking up until closing time, imperfect demand forecasting, legal restrictions on time that food can be served, and liability concerns over donations.  Beyond buffets, there is a cultural element that dampens potential donations of food items.  If retailers or distributors have excess food items to donate to a recovery organization, there is a view that they must not be running their businesses properly (a negative connotation).  Cash donations are easier.  In addition, an incentive system rewards donations of cash over product — donors receive a 250% tax credit for cash donations, but 0% for in-kind donations.  Thus, cultural and financial drivers promote donations of cash over product; and while in-kind donations could take some excess food out of the system by redirecting it for human consumption, cash donations allow charitable organizations to buy — and bring more food into — the system.

Aside from the missed opportunity to put excess food to its optimal use — feeding people — food wastage is an environmental problem which is particularly acute at the island level.  Landfill space is obviously extremely limited in Singapore, and with the absence of significant farmland, large scale composting operations aren’t viable.  As a result, most wasted food goes to incineration.

Amid this environment, Nichol and her brother co-founded Food Bank Singapore in 2012 as a corollary to their food distribution business.  Being part of a company that had been in business for decades, the two felt that “it was time for us to give back.”  The coexistence of extensive food wastage with a sizable food insecure portion of the population (1 in 10) provided the catalyst.  While 70,000 families in Singapore lack sufficient food on a daily basis, 796,000 tons of food goes to waste annually.  A similar, but worse, incongruence exists in the U.S. — where more than 60 million tons of food goes to waste annually, yet more than 40 million (about 1 in 7) experience food insecurity.  “The food industry is throwing away too much,” noted Nichol, “and we wanted to do something about it.”

Food Bank Singapore’s mission is to bridge potential donors and members, increase access to food for its members, increase awareness of the importance of food resource planning to ensure adequate food for everyone, and reduce food wastage through creative reuse.  That’s a tall order, but in picking up on Nichol’s energy level I can see how the group is getting it done.  The Food Bank initially began collecting excess food from food traders in 2012, and later started collecting packaged foods through bank boxes which were placed in key locations for individuals to fill for subsequent pick-up.  It now collects food on a much larger scale — including cooked foods and even some perishables from farms as well.  Today, when a large hotel operation plans a meal for 1,000 and learns that the total headcount will be 900 one day earlier, they will call Food Bank Singapore and advise them to be ready to pick up 100 meals the following day for redistribution.

Food Bank Singapore’s growth has been impressive, rising from two tons of food collected in 2012 to an average of 60 tons (120,000 lbs.) of food each month in 2015 — and as Nichol notes, “there is still a lot more room” to capture and redistribute even more.  Through its ties to Nichol’s food distribution company, Food Bank Singapore is able to come in contact with large quantities of excess food.  For example, the team has recently received large quantities of frozen salmon and french fries (the latter rejected for cosmetic reasons involving a perception of too much skin) which otherwise would have been incinerated.  Nichol is also working with multinationals like KFC which often has chicken that cannot be used due to size variations or because pieces stick together in the cooking process.  She adds that “this is a perfectly good source of protein” and sees a role in getting more multinationals to engage in food donations.  She also cites the benefit of a highly collaborative food recovery environment in Singapore, noting that Food Bank Singapore is able to pick up large donations (such as 500 bags of rice, a key staple) and redistribute them in conjunction with other charitable agencies.  Her team is also moving in the direction of redistributing more perishables, capturing excess from a local vertical farm.

The Food Bank now has two full-time employees (and a volunteer Executive Director) and serves 187 beneficiaries, either directly or through “match-making” with other donors.  It is innovative, making donations easy with GoGoVan — an app that enables a corporate donor to quickly book a vehicle for pick-up and delivery of food.  The theme behind the app:  Move food, move lives. A food rescue project involving a central kitchen to recover and safely redistribute cooked food is also planned.  Beyond recovering food, the group plays an important educational role, organizing trips to farms to try and get people to understand where their food comes from and what is required to grow it.  In addition, the Food Bank seeks to build community by planting the seeds of volunteerism in young people.  It is also extremely creative in engaging community members, encouraging individuals to “put a meaningful twist” on parties by linking the Food Bank to the celebration — either by bringing in a Food Banker for a talk, encouraging guests to bring food or monetary donations, or even offering the option of holding the event in the Food Bank Singapore warehouse!  What a great way to build relationships with community members!  The Food Bank also engages local companies, providing CSR-focused project opportunities for teams of employees while also encouraging other food service companies to leverage their resources in the food recovery effort.

On the broad issue of food waste, Nichol notes that she and her brother are “talking it up” and continually trying to get the issue on the radar of Singaporeans.  She is also hoping to impact multinationals, inspiring them to develop food banks in other Asian countries to get excess food to hungry people.  She believes that such an effort would have broad resilience benefit, enabling development of an extended food distribution system to hedge against future natural disasters.

There is a real sense of community at Food Bank Singapore.  As noted on their website, donors have the opportunity to spread “joy in every bundle” of food, and extend their love to those in need.  The message connects.  There is also an upbeat vibe about the work; Nichol’s energy level is palpable as we talk of the challenges and opportunities in excess food and food recovery while touring the warehouse.  You want her on your team when addressing these issues.

Returning to my hotel, past the port facilities containing so many cranes and containers (many of which were undoubtedly full of food), I found myself reflecting on many of Food Bank Singapore’s key messages:  “Donate your excess food!  Why bin it when you can still eat it?”  “Let the Feeding Begin.”  Move food, Move lives.”  Sound words, indeed.  And at Food Bank Singapore, great efforts to back them up.