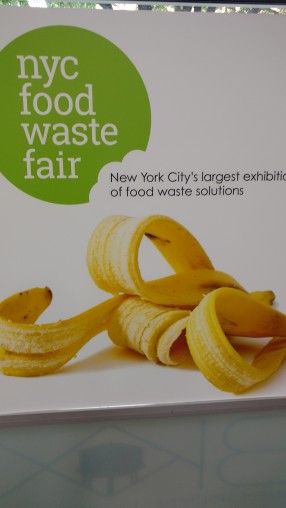 Late last month I was fortunate to attend the NYC Food Waste Fair at the Brooklyn Expo Center.  The event was billed as a “soup to nuts” approach to food waste prevention, recovery and recycling – and indeed it was – with exhibitors covering all aspects of the Food Recovery Hierarchy and thousands of interested participants exploring all of them throughout the day.  The event sought to give representatives from business the knowledge to build a food waste prevention program, and knowledge of how to comply with relevant laws and regulations.

The Food Waste Fair was sponsored by the Foundation for New York’s Strongest – the non-profit arm of the NYC Department of Sanitation (DSNY).  Among other things, the Foundation seeks to leverage non-traditional strategies to promote sustainability while also developing meaningful partnerships with private sector organizations to help NYC achieve a zero-waste-to-landfills goal by 2030.  As part of that “0x30” goal, the DSNY is growing its program for residential food and waste diversion (NYC Organics) and implementing the City’s commercial organics mandate.

The Foundation noted that NYC businesses discard more than 660,000 tons of food waste annually.  Given that volume, it’s no wonder why there was much interest from companies in the organic waste sector when the City announced plans to ramp up recycling efforts.  In citing this volume, the Foundation also emphasized that “food scraps are not garbage” – a welcome acknowledgment in my view.  We need to revise our terminology; instead viewing this “waste” as an excess food resource which (as the organizers noted) can be used for multiple purposes – feeding people, feeding animals, nourishing soils to enhance food production, and creating energy.  There’s a role for producing industrial products, too.

The first panel covered the key themes of design and innovation, with Ideo’s Matthew Ridenour espousing the importance of circular thinking regarding food waste by reminding the audience that there is no waste in Nature.  Outputs of one process become inputs to another.  We would do well to bring that circular thinking, with an upfront emphasis on prevention, to our food system.  Issues of scale – and financial opportunity — were also noted:  New York City spends $179 million annually to handle food waste, while across the country cities spend $2 billion.  And the issue of properly valuing our food was also covered by the panel:  if we covet the cold-pressed juices, why would we not covet the pulp as well?  Blue Hill’s Adam Kaye discussed the importance of rethinking the architecture of a plate, encouraging chefs to use their creativity to reduce the environmental footprint of food offerings.  He noted that chefs have the power to create something (from juice pulp or other “waste” products) that people won’t discard, but will eat – a compelling way for chefs to promote responsible behavior around food.

The Fair also included a number of hands-on workshops for participants with the goal of enabling subsequent action on food waste reduction.  Some of the key topics covered included Smart Procurement & Other Waste Prevention Strategies, Cost Effective Tips for Preventing Food Waste, How to Receive Tax Deductions for Food Donation, How Confusing Date Labels Lead to Food Waste, How to Conduct a Waste Audit, Commercial Organics Law, Zero Waste Guidelines, Demystifying Food Donation Liability, and What to Know Before You Throw – An Introduction to Donating Food.

The DSNY’s central role in underpinning the event brought an interesting perspective not often seen to date in conferences on food waste reduction.  For example, one exhibit included a series of displays entitled “Rubbish and Revenue: A Brief History of New York City Solid Waste.”  That exhibit included two powerful posters from the War-era that I had not yet seen.  The first, amid the backdrop image of a battlefield, carried the headline “Idle Rubber Handicaps The War Effort” and encouraged citizens to “Get in the Scrap” and “Salvage All Scrap Iron, Steel, Non-Ferrous Metals, Rags.”  The second depicted a soldier manning a machine gun with an enemy plane crashing into the ocean beyond.  The caption: “He needs more than guts!  He needs fighting weapons made from your JUNK.  Get It In Today.”

I never tire of seeing these inspirational, resource-focused posters from the War-era and reflecting on the mindset that prevailed at the time.  The stark urgency of the messaging jumps out.  Clearly we were a country in crisis mode.  Desperate times called for desperate measures.  Government leaders realized the gravity of the situation and the need to engage citizens in recycling.  Everyone was called upon to do their part.  Being responsible with scarce resources was expected – it became the norm.   Not doing so – i.e. being careless with resources that could otherwise support our troops – was looked down upon.  After all, there was a life or death element involved – everyone had a strong incentive to help win the War.

Viewing such posters some seventy years later reveals how far we have diverged from the resource-conscious mindset of that time.  Recycling of a handful of products is widely available today but hardly the strong expectation – especially in regions where landfill rates are cheap.  Resources are cavalierly discarded as a function of a throwaway economy in which it is often less expensive to buy a new product than to repair an old one.

I continue to think that there are important lessons from the War-era mindset that need to be amplified and harnessed – lessons that should inspire a reframe, a “what if” mindset today. Because when it comes to food and food waste, we are in crisis mode.  We’re wasting far too much of our food (between 30% and 50% annually).  We’re consuming far too many resources in the process (1.7 planet’s worth of resources annually according to the Global Footprint Network, which is not sustainable), and we’re polluting the environment at the same time.  We’re also missing the opportunity to feed people with highly nutritious food.

It’s a compelling vision.  And it’s one that we need to achieve, as we cannot continue to utilize more resources than can be naturally replenished.  Further, the rising middle class in developing nations lends more urgency to the situation.

The War-Era posters indicate commitment to the ultimate team effort.  When we consider the magnitude of the food waste problem — and the fact that if ranked as a country, food waste would be the third largest emitter of greenhouse gas emissions behind the US and China – it seems to me that we are again in need of commitment to such a global team effort.  And when we consider food waste in the context of sustainably feeding more than nine billion global citizens by 2050, we can easily view this global team effort as a life or death effort, much as responsible resource use was viewed in the War Years.  As Jonathan Foley noted in his outstanding TED talk (The Other Inconvenient Truth), we only get one chance to get this right.  And since that’s the case, when we think about how much food goes to waste in our current system, we’d better start asking “What if…?”