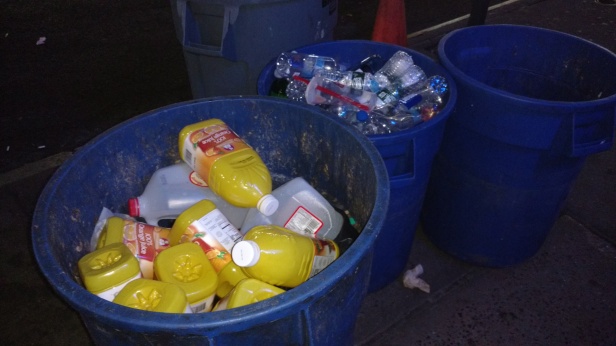 I really look forward to Climate Week in New York City in September.

The multitude of events focused on critical climate issues like food, water, energy, and cities, and the gathering of thought leaders from around the world to address them, breeds a unique level of energy, inspiration, and hope.  And just trying to get around town when the UN is in session adds a level of chaos which I view as positive, because I know that much of the congestion stems from the fact that many people have converged to engage in important discussions related to advancing the Sustainable Development Goals.

I had a busy and energizing week in the City, starting with teaching a UPenn graduate class on food security issues with a great contribution from Lisa Kitinoja of the PostHarvest Education Foundation, followed by the WRI-led Champions 12.3 event on food waste, the Barilla Center for Food and Nutrition’s (BCFN) session on Fixing the Future of Food, the UN SDG Action Zone event, a session on “Food For Earth” with Sara Roversi’s Food Food Institute at the offices of the European Delegation to the United Nations, and a visit to Compass Group’s Stop Food Waste event.

My list of takeaways from the week is extremely long, but I’ll focus briefly on two that bookended the week.

The first occurred late Sunday night as I parked and walked up to my hotel.  Not ten feet from the hotel door stood a few blue disposal containers for recyclables awaiting pick-up.  While one was full of empty, crushed water bottles, the second was full of unopened, half-gallon orange juice containers – perfectly good, and readily consumable.  As always, I was struck by the callousness of such disposal – tossing juice without the slightest effort to make it available to any number of hungry people in the immediate vicinity – and adding it to crushed recyclables as if it had no value at all.  While I stopped to take a picture, a few individuals paused to investigate, and they, too, were clearly left wondering why such a large amount of sealed juice containers were being discarded.  One individual was clearly taken aback, asking me “They’re throwing that juice out?  Why, what’s wrong with it?”

I didn’t have an answer, but I reflected that this situation, like so many other cases of discarded food, is indicative of the culture of abundance that exists in our country around food.  Food comes too easily for many Americans; and as a result, we don’t value it properly, and we discard it too easily.  And given the strong linkage between food waste and climate (as FAO notes, if ranked as a country, food waste would be the largest emitter of greenhouse gas emissions behind the U.S. and China), we must accelerate progress toward achieving the Target 12.3 goal of cutting food loss and waste in half by 2030.  Food is the strongest lever we have to fight climate change.  Quite simply, food is climate.  So seeing cases of such callous disposal of any kind of food is highly disturbing.

On the back end of the week, I joined Sara Roversi and team for the “Food For Earth” session at the offices of the European Delegation to the UN – covering aspects of the critical linkage between the food system, human health, and planetary health.  Doctor-turned-chef, Robert Graham of Fresh Med NYC, told his story of transitioning from treating the symptoms of poor health with drugs to upfront prevention of health problems through healthy food.  Graham now advocates working with companies and farms to help people eat their way to health, using food as medicine.  There are, of course, important parallels here to the key theme of this year’s EAT-Lancet report – that “transformation to healthy diets by 2050 will require substantial dietary shifts” and the transition to such a plant-rich diet, with few animal-based foods, will lead to improved health for people and improved health for the planet.

Also in this session, I was stuck by a comment from a young woman, Cassia Moraes of the Youth Climate League, who spoke of the need for urgent action related to climate change.  Gesturing toward the UN building, she stated that her generation needs to be properly represented in all of the policy and panel discussions taking place, because many of the older individuals involved in those discussions won’t be alive in 2050.

It’s a great point – and one that must be addressed to ensure that the proper level of urgency is being brought to the many high-level talks on climate change and progress on the Sustainable Development Goals.

Which takes me back to my very first experience at Climate Week this year – the image of the callous disposal of cartons of orange juice that could easily have been redirected to individuals in need.  Despite all of the great takeaways from many sessions that week, that image sticks with me as indicative of the enormous strides we must make in terms of changing mindsets such that we properly value our food (and the resources that go into producing it), and we normalize food waste reduction behavior rather than food wasting behavior.  And as continual high-level reports show, we don’t have time to waste in making that transition.  We’re entering the decade of action – the Sustainable Development Goals come due in just ten years.

I’m hugely energized, and inspired by, all of the events in which I participated this year, and I’m grateful to all thought leaders working to advance SDG and climate progress.  But I’m also hoping that next year, my first powerful image from Climate Week will be a positive one.